For us, camping is one of the best ways to get in some quality family time (and A LOT of laughter.) With boys who love their video games a little too much, and the older siblings always busy with work or school, camping gives us the opportunity to really connect without the distractions of every day life. Phone service was present, as always, but our batteries gave out pretty quickly (yahooo!)

Now, we are no camping pros, but we have picked up a bunch of tips and tricks that make camping with a large crew more accessible and easy going. We think everyone should be able to enjoy the outdoors with their kiddos so we want to share what we have learned with you!

1.) Find a park with a hiking trail system, especially if your group wants to go on an adventure! 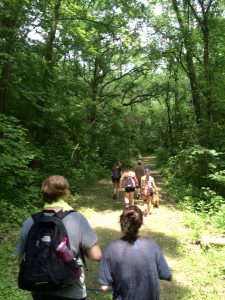 We chose the Mississippi Palisades State Park for our camping excursion. It boasts a 13-mile trail system, with five trails in the north and five in the south. On the park’s website, we found that the north trail system was less hazardous and had wider paths. Considering we had two puppies in tow (more on them later) and it was nearly 100 degrees out, we chose this path first to see how everyone would do, and it was amazing! At the peak of one of the trails was an incredible view from the top of the palisades. A selfie of the whole group was obviously in order! Troy’s arms are so long we call him the “selfie stick”. 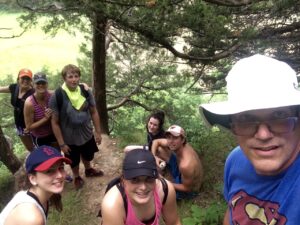 The next day was a bit cooler and we all felt great from our previous hike, so we hit the south trail system. It was much more rugged and “off-road,” if you will. Climbing was required much of the time and the trails weren’t as marked so we were really happy to have our trail map with us. It was so fun to explore an area nearly untouched by civilization. We definitely enjoyed the south trails more because of the feeling that you were walking on the same paths that the Native Americans forged so many years ago.

2.) Use a carabiner to make your backpack feel lighter while hiking.

If your backpack already has a chest strap then you’re good to go, but ours didn’t, so we improvised! Just use the carabiner to attach the backpack straps at your chest. This takes so much weight of your shoulders (literally!) and makes carrying a heavy backpack much easier. We packed a bunch of water and sandwiches in ours so we could have a picnic once we found a cool view.

3.) If your dog is afraid of the water, throw him in a kayak! 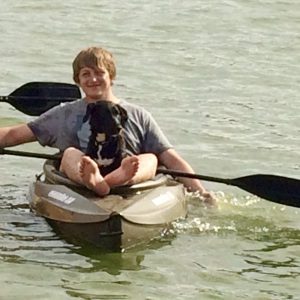 A boy and his dog. Look at that smile!!

This is where the newest addition to our Silly Zoo comes in, Bear! No, not an actual bear, just a little puppy the kids named Bear. He is half German Shepard, half black Lab so the name is pretty fitting considering he should grow up to be a big boy.

After our hiking we were all in need of some refreshing water to play in, so we loaded up the kayaks and headed to a nearby lake. Our slightly older puppy, Paisley, loooooves the water so the minute we got out of the car she was off like a flash. On the other hand, this was Bear’s first experience with a large body of water. It was so cute, and a little heart breaking, to watch him tentatively paw the edge of the water. As much as we could see that he wanted to join in on the fun, Bear would not take the plunge. Not wanting him to be left out, we plopped him into a kayak.

4.) Bring a yoga mat to double as a sleeping pad.

Regular camping sleeping pads are great, but you never know when you might want to bust out a downward-facing dog, right?! Plus, not everyone has a plethora of camping supplies in their garage and this way you can shave off some of the supply costs. Camping should be stress-free, not expensive!

5.) Cook corn on the cob with the husk still on.

This will minimize the amount of clean up and cooking supplies needed. Gently peel away the outer layers so that the husk remains attached at the bottom of the ear, remove the silks, then recover the cob with the husk. The removed silks can then be used to help start the fire. Once the corn is prepared you can either throw it directly on the grill over the fire, or place tin foil over the grill first. We put ours directly on the fire and it gave it a great smoky flavor. Don’t be afraid if it starts to look charred on the outside, the inside will still be great! Since cooking time varies depending on the size and heat of the fire, check the corn occasionally and remove once the kernels are tender. If you have reluctant corn huskers, make it a game! We had a competition to see who could husk the most ears of corn. Yes, we are from IOWA! 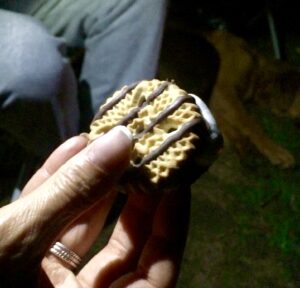 This is by far my favorite part about camping. Who doesn’t love a gooey, marshmallowy, chocolaty cookie sandwich of goodness? Needless to say, we scarfed down a few too many of these bad boys. Good thing we went on that super long hike!

Anyways, to make creating this traditional camping dessert simpler, we used Keebler Fudge Stripe cookies in place of the traditional graham cracker and Hershey chocolate combo. The result was really tasty! I might even like it more than the traditional version!

7.) If you don’t like chocolate (like most of our boys), replace the chocolate of the s’more with blueberries.

Don’t ask me how Troy thought of this, but while we were sitting around the fire making s’mores he asked for some blueberries (or BLUEBS as we now prefer to call them), and we curiously watched as he put them on top of the melty marshmallow of his s’more. The result was surprisingly delicious and everyone wanted to try making one. BLUEBS all around! They were definitely a hit with the boys who don’t like chocolate quite as much as the girls (why is that a thing?!), but I’m willing to bet that a combo of chocolate and blueberries would be even more amazing. We’re definitely going to have to give it a try next time! Or, you could try it out for us and let us know what you think!

8.) Last but not least, LOVE each other! 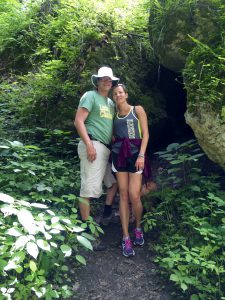 If you don’t do anything else, enjoy your time together. Talk, laugh until your abs hurt, share funny stories, do weird dance moves, whatever makes you happy! Get out into the wild and make some memories!

Have any camping tips or stories to share with us? Leave a comment. We would love to hear from you!

This site uses Akismet to reduce spam. Learn how your comment data is processed.